Aparthotel Makosh offers five stylishly furnished single rooms with full equipment, each of which is with a size  34 m2. Every room has an air-conditioner, digital TV, Internet, bathroom, wardrobe, refrigerator, hallway furniture, double beds (of which two are with sizes  2 x 90 m2).

The aparthotel offers its guests 13 apartments that include everything from the single rooms plus a kitchen with a refrigerator, hot-plates, extractor hood, sink. Three of the apartments also has an oven.

There are three types of apartments in aparthotel Makosh:

Luxury apartment – which is 65 m2  and has a corridor, living-room with a kitchen, two bedrooms with a toilet. It also offers a dining-room with four chairs. The price is 120BGN per night.

Deluxe apartment – which is  51 m2 and has a room that is both a kitchen and a living-room. The apartment offers two bedrooms and a toilet. The price is 100BGN per night.

VIP apartment which is 120 m2  and offers two bedrooms, one corridor, two toilets, washing machine, big living-room with a kitchen and a dining table in the dining-room. The price is 140BGN per night. 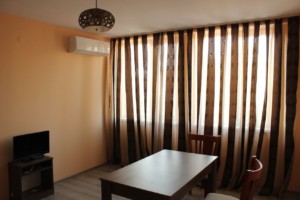 On the first floor are situated the big VIP apartment, two single rooms, two apartments (one with a corridor and one without).

The second floor offers two double rooms, one apartment with a corridor and one without.

The third floor  has two double rooms, three apartments with a corridor and an apartment without a corridor.

The fourth floor offers three apartments: one of the apartments is 100 m2 , two bedrooms, living-room, bathroom, the other two apartments are 75 m2 and have a separate bedroom with a living-room and a bathroom.

The whole hotel building is fitted out with a fire alarm system.

The reception is situated at the first floor which is 40 m2.

The hotel has a basement with a size 760 m2 which offers a safety vault.